Here is the "grand plan" for my Demondrille-Kingsvale layout: 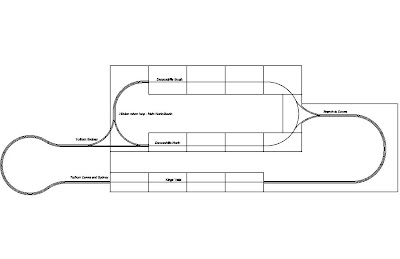 The modules (the rectangles shown above) would be in my train room; the loop on the left would be in an area under a balcony which I would have to enclose.  I have to create openings in the brickwork for the track to exit and re-enter.  The loop on the right is in an area under the house - difficult to access for operation, but plenty of room for construction of a simple un-landscaped loop, probably in code 100 for reliability.  But my plan is to build it in stages and take my time.  So I don't have to worry too much about that yet.  The most pleasing thing about this design is that I can run trains continuously as well as preserve the character of both Demondrille North and South, as well as the branch line to Young/Cowra/Blayney, via Kings Vale.

Below is the condensed diagram from the 1954 ARHS Bulletin (ideal given that I'm modelling 1953).