Here's some more description of what I've been doing to model the Kings' Vale platform.


The real platform is covered in crushed quartz and this will be represented by fine white sand, available from Chuck's Ballast.  Under this, I have painted the platform a mixture of Humbrol earth colours to represent the clay usually found under the quartz.  It's mainly Sand (matt 63), with some Leather (62), Mid Stone (84) and Middle Stone (225) dappled-in when wet. 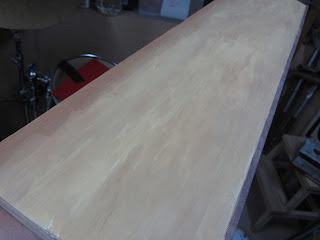 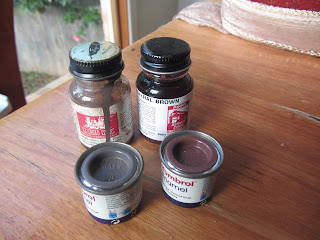 I painted the brickwork before attaching the platform to the baseboard for convenience.  This was sprayed using a mixture of Floquil Mineral Brown and Boxcar Red to give a base red-brown brick colour. 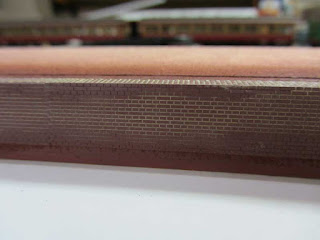 There is an opening in the platform face at the signal box, which would have been where the point rods and signal cables exited the frame.  Visiting the area recently, I could not see this opening in the platform (would they have bothered filling it in?  I wouldn't have thought so), it does seem to be present on the photo at the top of the blog and makes sense that the frame in the box would have controlled the up and down home and starting signals. 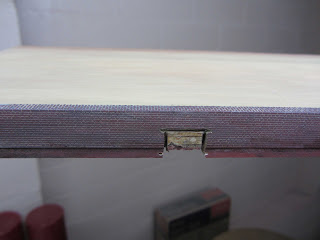 Because I forgot to make this opening earlier, I have had to perform some minor surgery with the Dremel. 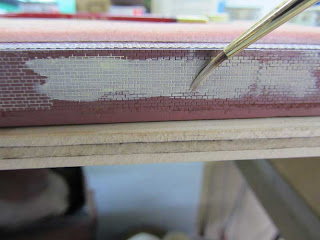 After the base colour was completely dry, the mortar colour was heavily applied and then carefully wiped away so that it remained in the grooves of the etched brass brick sheet. 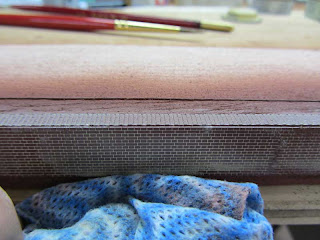 Capillary action draws the paint into the grooves and it tends to stay there.  Wiping the surface cleans the "mortar" off.  The effect is shown here. 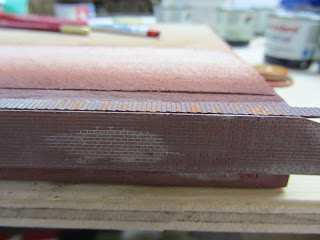 Here you can see the edge of the balsa, which was subsequently filled and sanded.  It also shows how the thinned paint, when wiped away, remains in the mortar courses.  You can see on the top that some bricks are a terracotta colour, to represent the variation of brick colours in a batch. 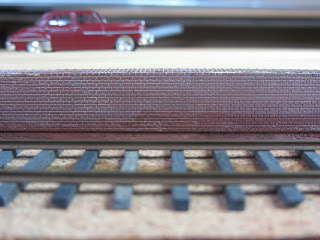 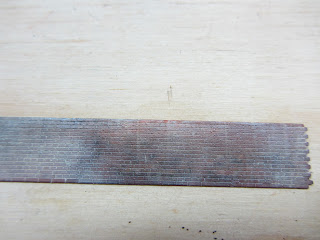 This was some experimenting I did on an offcut.  The variation you see in real brickwork where the pointing has worn in certain areas or mildew has grown turning the white mortar black. 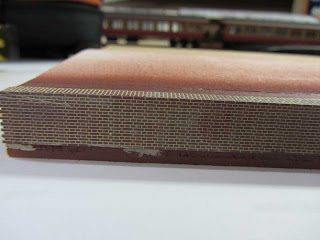 An area of pristine brickwork.

I am in the process of documenting this in more detail for a magazine article.
Until next time
James

Posted by Railway Institute at 08:42