Coinciding with the AMRA exhibition, I have had a fairly intense "railway" period, though without much actual modelling.

I spent four days in the country last week, touring through Mudgee, Narrabri, Coonabarabran, Inverell, Ben Lomond, Armidale, Tamworth, Werris Creek and back to Sydney.  About 1700km in total.  Took a few photos, chased a few trains and saw a banked coal train at Ardglen.  Great weather to follow the line through spectacular countryside

This weekend, I've been showered with various models I've had on order for a while - CPHs with sound and some magnificent LFX kits from Mr McCormac; as well as an Auscision VR B Class.  I have always had an attraction to these unique locomotives and they fit into my prototype if I say they are passing through en route to Victoria! And boy, does it run beautifully!  I also have my eye on the Tulloch Atlantic tank wagons from Southern Models, but have resisted so far.  I also recently acquired an SJM FL and HFL kit and the Andian models well-wagon kit.  So I have a bit of work to do, but it's been nice having all these boxes to open.

The layout is running in DC mode, which is progress, but I'm still having trouble running DCC.  I am sure there is something wrong with the NCE Power Panel because there's no voltage on the output.  But that's a problem I'll sort out tomorrow.  Then I'll be able to hear my CPH! 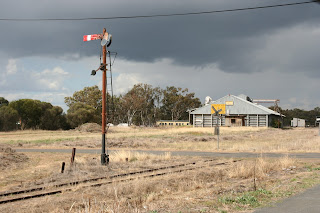 Coonabarabran down home signal
Posted by Railway Institute at 23:10