I’ve almost finished a first draft of the track layout for Demondrille. The good news is that it seems to fit in the space I have, despite the fact that I have to compromise on the minimum curve radius. If I was running a point to point this wouldn’t be necessary, but to fit the whole thing in, I’d have to create two point-to-point layouts. I don’t think this would work for me operationally, so to accommodate a loop arrangement, I need curve radii down to about 25 inches. This allows me to model the prototype gradients and to have a staging yard on a lower level. 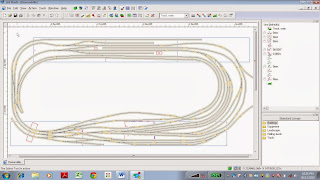 Overall, I’m stoked with the layout. I am able to reproduce every line, loop and turnout that existed circa 1955. It will be great to operate (I will need help, guys!).

I only have two concerns:

• It really will be train room; there won’t be much room for the things currently in there – my modelling bench, paint booth, tool box etc. Is this really a problem? I’ll just have to find clever solutions to work around the layout. Access into the room and to the other spaces (under the house for example) will also need to be modified.

• I like the look of the railway in the landscape. In this layout, there is a lot of track; it might look too busy and lose the special appeal Demondrille had of an elaborate steam-era facility in the middle of nowhere. This is something I will have to watch out for.

Why not choose somewhere different then?

Well, I have a passion for this place; I’m not sure anywhere else (or anywhere simpler to model, anyway; all the other places I like would be even more complicated) would sustain my interest to see it through. I wanted to find out about it and model it in its entirety from the first time I stumbled across the place. Railway modelling love at first sight, perhaps!

Anyway, it's a hobby; at the end of the day there's no wrong answer if I'm having fun.

I was there again yesterday; first time in a while that I ventured down to Demondrille south. To my surprise, the vehicular track is in pretty good shape and goes as far as the distant signal beyond Demondrille South. It must have been renewed and used a fair bit during the concrete resleepering and resignalling work.

In this picture, the road is on what were the transfer sidings, with the down goods dive on the left of frame, with the main lines beyond that. Further on, the “road” goes right along what was the Up Goods line, which seems a bit insulting.

Here are a couple of other photos where the southern junctions used to be; not much evidence left now.

This one is looking in the down direction from the approximate location of South Box.

This one is at the approximate location of the southern junction (see the picture on the cover of Trackside 3:

I’m very lucky that I photographed the remains of the facility while much of it was in place; now there is very little left, and what is left is overgrown and/or inaccessible. Those hundreds of photographs, mostly taken in the early 90s, are really going to come in handy!

Certainly going to be a fun ride building this one!
Posted by Railway Institute at 22:42