I was keen to complete a model to display at the New England Convention.  One that I've been eager to build was one of the two Mike McCormac Models LFX kits I bought some time ago.  I saw the effort Mike put into the design of these kits and the accuracy he was aiming for and knew they would be a joy to build.

I did get the kit to a stage where I could display it at Armidale, but I didn't finish all of the windows or the weathering.  More on that later.

As I expected, the kit does go together beautifully - everything fits so nicely.  There are some steps that are quite fiddly, but the design is well thought-out and the result is worth the effort.  There were a few times where I was crawling around on the floor trying to find a tiny brass part which had been ejected from the tweezers...

Here is a photo of a trial fit of the roof in the body. 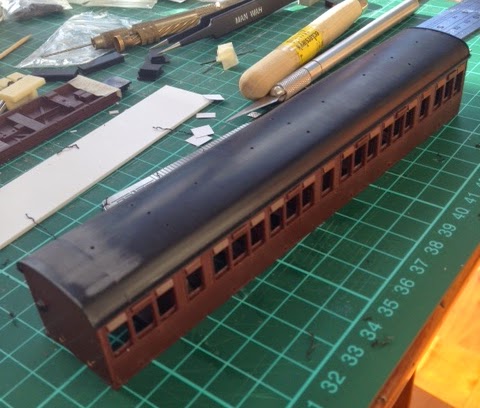 The interior detail of the carriage is very fine. 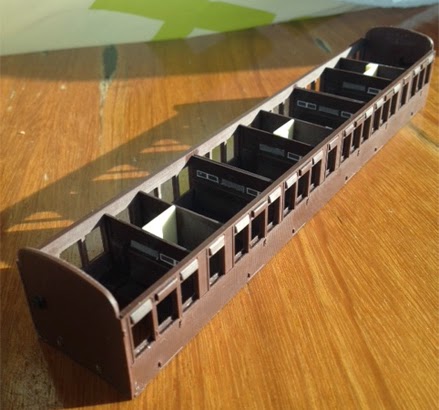 Here is one of the bogie assemblies,which are a combination of brass etches, lost wax and epoxy castings.  They run very nicely and are highly detailed. 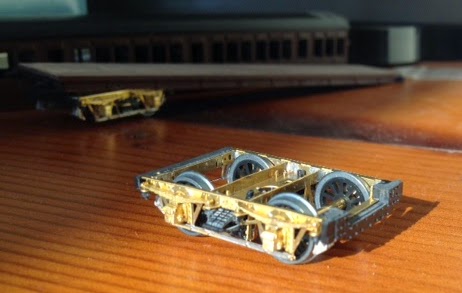 Quite a few hours later, the model has been painted in tuscan and russet and lined in buff, using a bow pen. 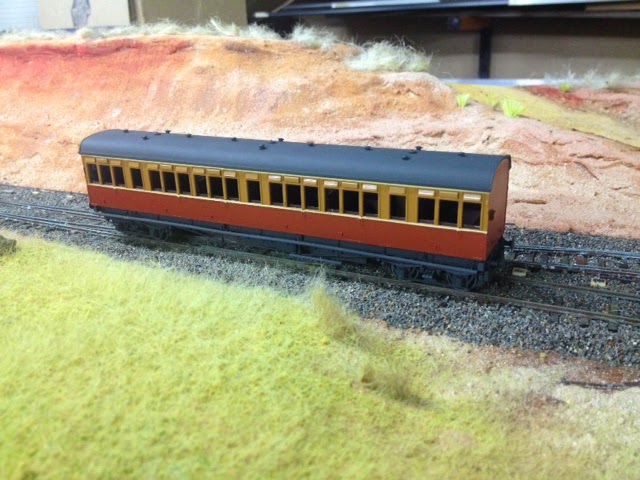 I was quite satisfied with the paint job - seems that I'm starting to master the air brush at last.

After this, the decals were applied and a coat of Dullcote applied.

Next came the weathering, and this is where things got interesting.  Using my trusty Wild Swan book on painting and lining, I washed the sides in thinned down Humbrol matte black so that the black would settle into the grooved sides and provide depth.

All was going very nicely.  but after finishing the second side I turned the model back over and found that my beautiful paint job had turned white!  I think the enamel thinners had reacted with the Dullcote, and resulted in a white, chalky finish.

I tried a few methods to get the chalk off, including enamel thinners which ate through the paint and removed a decal.  A few swear words were uttered.  Weathering is normally pretty tolerant to disasters, but this was getting ridiculous!

I found that scrubbing with a fairly stiff brass brush got rid of most of the chalk, but left enough on to provide a weathered, sun-bleached finish, It looked quite good!  Saved!

This is pretty much the state the model was displayed in at Armidale: 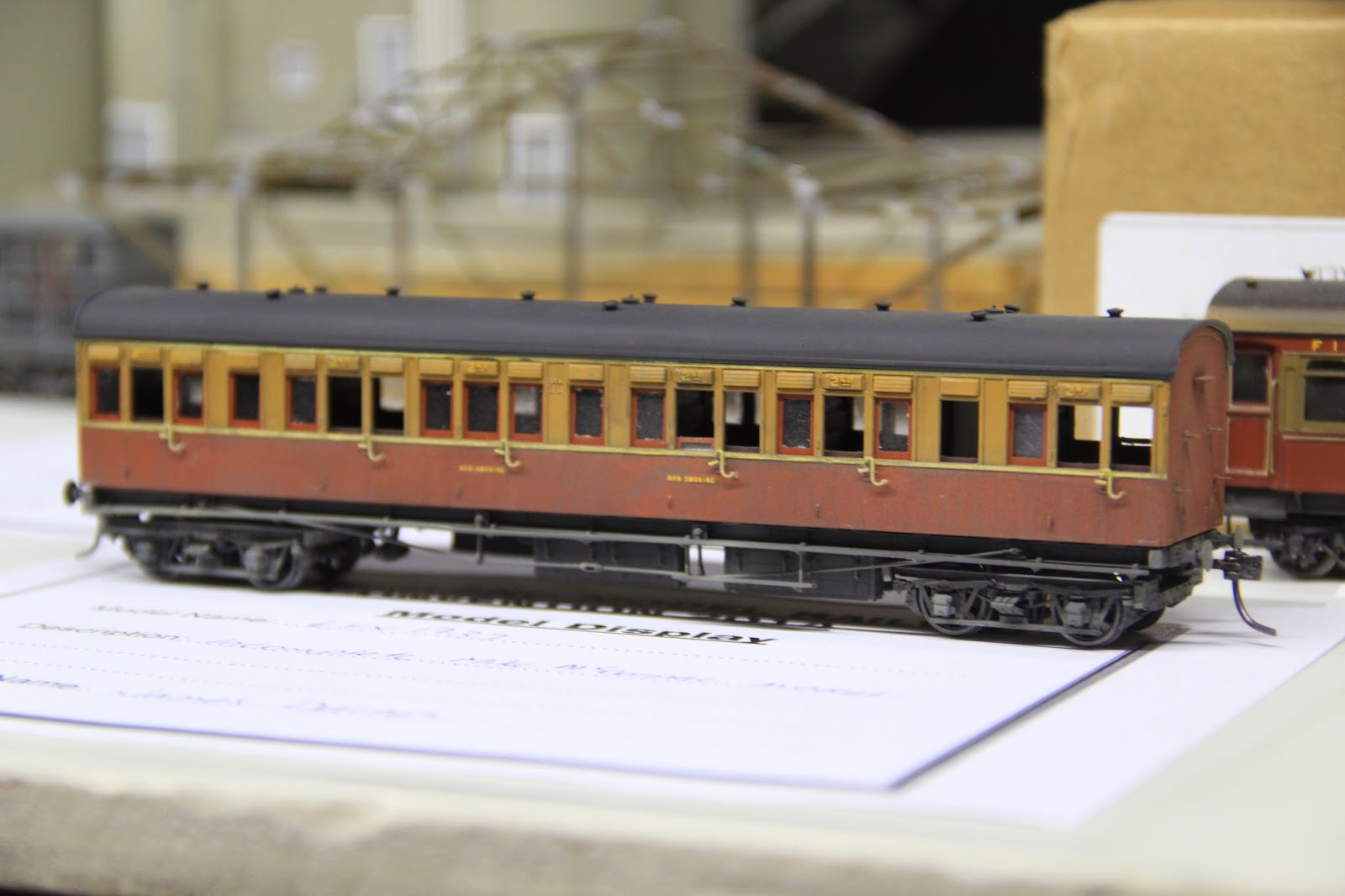 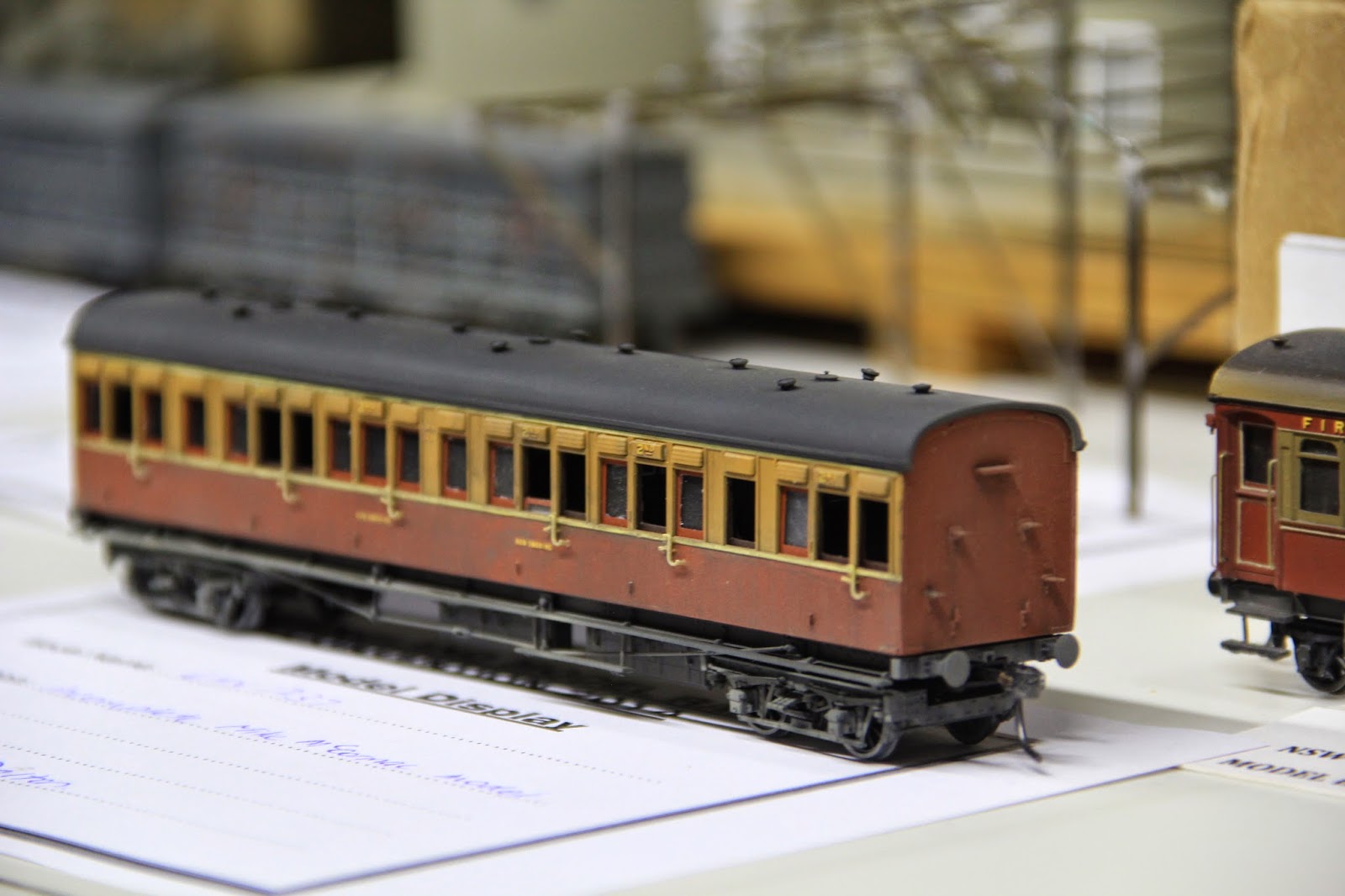 Now the model is almost finished with the addition of the handrails, windows and couplers and completion of the weathering.  But I'll save that for Part 2!

Posted by Railway Institute at 22:14