Having to absorb and dispose of my Mum's possessions after she moved into a nursing home prompted a rationalisation of "stuff".  To cut a long story short, this resulted in construction of new, more space-efficient shelving which doubles as a support structure for the layout.  I've also built my first backscene structure and pelmet which I will replicate for the other modules.  The ply backscene has been given a coat of gesso in preparation for the artistic part.

The photos show where I'm up to.  The new module adjoining Kings Vale will allow me to complete the station and yard. 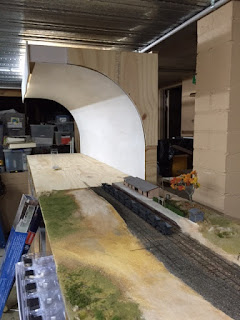 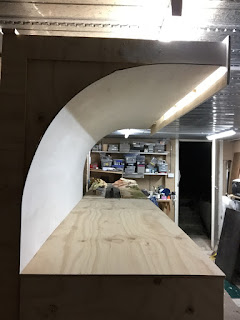 Height of the track bed is approximately 1.35m which is a good compromise given the limited headroom of the room and the amount of storage underneath I need. 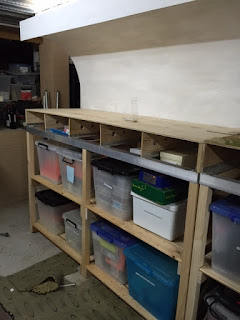 The shelving underneath holds more boxes than the equivalent Ikea shelving I was using. Longer term, I'm planning to replace plastic boxes with ply boxes. Plastic is fast and cheap, but over time the plastic breaks.  The taper of the plastic boxes also reduces their efficiency. 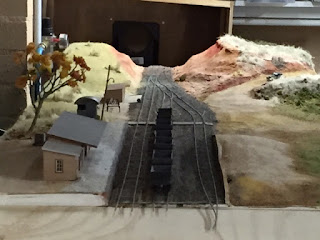 The original module has sustained some damage to the track.  It's also corroded in some areas.  so a bit of remedial work will be required there.  I also want to improve the look of the ballast.  It's too clean and modern for the era and location. 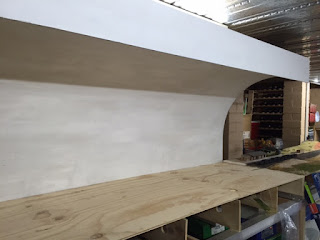 I haven't attached the baseboard yet.  I want to put in some cut-aways etc to improve the contours and put in a little creek towards the left (southern) end of the scene. The face of the pelmet will eventually be painted black with "Kings' Vale" in white lettering.

Posted by Railway Institute at 21:33